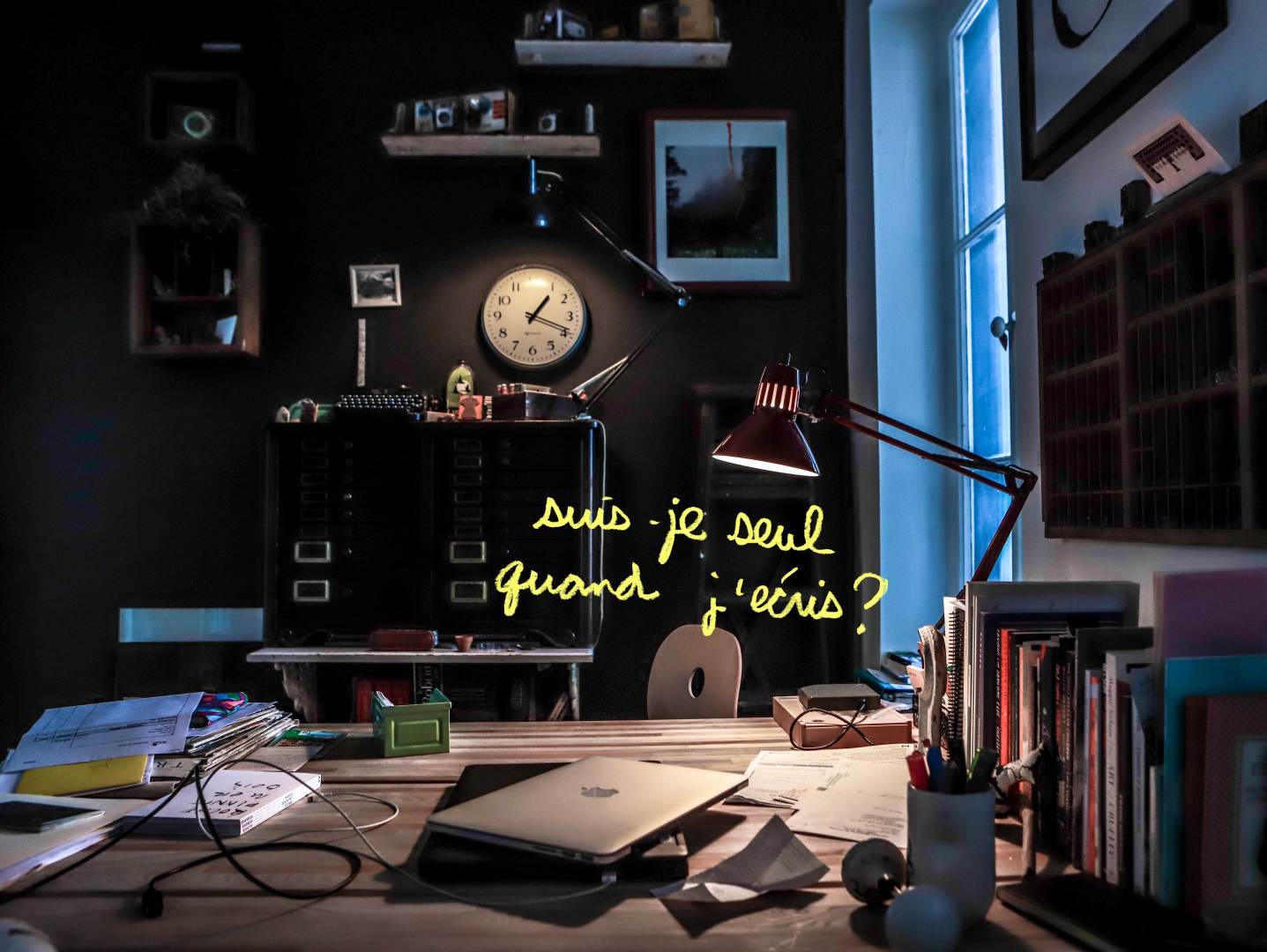 Text from a series conceived for Rhizome’s 20th anniversary called Am I alone when I write? ╱ Eight artists and writers who have collaborated with Rhizome describe their creative experiences in literary arts. Simon Dumas, Rhizome’s artistic director and founder, is among them and, appropriately, up first.
—
Am I alone when I write? I am never alone in literature, not when I read and not when I write. Even if I write little. My love of literature didn’t so much lead to being a writer — much as I aspire to writing and try to write books which occasionally get published — as to a similar, somewhat unique activity which mostly involves directing writers on stage. I should tread cautiously, so weighed down is the notion of “staging” by meanings, expectations… by an aura whose luminescent rings are steeped in a force perhaps drawn from the inertia of an ancient tradition. “I’m in a profession that’s been around”, a director friend of mine threw out when we were discussing this very thing. “For a thousand years!”, he added. At the time, I didn’t know what to say. It shut me up, stopped me in my tracks.

And mine doesn’t exist?

I’ve been producing, creating and running all kinds of projects for nearly 20 years with Rhizome — shows, performances, installations — involving writers of all genres. They write new texts, participate in rehearsals, creative and working sessions, and get on stage. In the process, they deviate from their normal creative habits, leave the solitude of writing, and submit to a shift.

I was shocked at the time. Then, after thinking about it, I realized he was right. What I do doesn’t exist, because it voluntarily places itself in a kind of disciplinary no man’s land. My sphere of work is dislocated, that is, it has opted to inhabit the space next door. It is not at home; these aren’t its things. It wields tools that aren’t its own. This dislocation, however, is just the thing we’re interested in: what happens when I start out from literature, but my destination becomes live performance instead of the book?

Another friend, the poet Bertrand Laverdure, recently asked me if I’d be looking into virtual reality soon. I replied no, I felt I hadn’t explored all the possibilities of live performance, of what happens when I, an imposter, take hold of the thirteen sign systems of theatre [i]. The more I unpack it, the more live performance spreads its many marvels in front of my astonished eyes. One of its many defining features is that the signs’ emitter and receiver share the same space-time. This is very different from books where, inevitably, there is a break in space and time (a lag): the writer is not in the same location or in the same time as the reader. I’m not saying that my interest is shifting from books (a medium) to performance (another medium). On the contrary, as I progress in my work, as I discover what the transition from the written to the uttered entails, from paper to live, from a virtual space to a real one, the connections created between these two modes of artistic expression are what fascinate me. A text is an entirely virtual space where everything — narrative, experiences, sensations— takes place within language. The theatre experience, on the other hand, plays off the confrontation of the materiality of place, lights, bodies and the immateriality of fiction (or the narrative, whatever the case). Of course, language courses through theatre just as it courses through most spheres of activity in society. It is the fact that language is so mainstream that makes it such a distinctive material for creation: A cultural material, meaning it is defined and constantly shaped by its community of speakers. Language becomes a “material”— and not a “mode of communication” or even a “tool” — when it is the basis for an artistic process. In other words, I believe that literature is fundamentally art created from the “language” material and that art arises when a thought puts stress on (or displaces) a material and the latter puts up resistance.

What counts as applying stress? It could be hitting a piece of stone with a chisel. In literature, it would be fiddling with syntax, hijacking meaning or encouraging multiple interpretations, always taking the side roads that suddenly appear when you write. In contrast, the language of instruction manuals is the least stressed in the world. Relaxed, it becomes utilitarian, communicational, standard.

Language as a material resists when the meaning of words refuses to be unequivocal, when it asserts its historicity, fashioned by generations of people who craved emphasis, colourful speech or who had simply misunderstood the real meaning of a word or expression. This slow semantic shift caused by usage gradually lends language a specific collective experience. With time, words wear thin. What they lose in precision they gain in nuance. And it’s this gap between the different meanings of a word — but also the gap between the writer’s desire and the reader’s experience — which gives the text its thickness and allows us to drill into it and extract core samples whose layers, found at various depths, contain surprising revelations about the author, but also about our society, our history. And about ourselves.

My wish is to bring this language-as-material approach face to face with the materiality of a place, lights on bodies, the vibration of a word, the physicality of the author, of the one we know is responsible for what we’re hearing, how they relate physically with the audience, but also with their own text. This is a road I am not done surveying. And I haven’t even mentioned sharing, the fact that the one who speaks and the one who listens are together in the same space and the same time, like something that’s at once communion (being together) and constraint (fixed time of the performance).

During an interview, a third friend, Jean-Yves Fréchette — a creative man who, over the course of his respectable career, has proved he can turn anything into literature — said that Rhizome’s process urges a celebration around a literary text. In saying this, he echoed another friend and partner, Philippe Franck — critic, artist and director of Transcultures – Media Arts Center, a Belgian cultural non-profit — who calls me a “metteur ensemble (putter together)”. It’s true that I love nothing more than convening people around a literary text. A process I sometimes call “getting people to read”. The first circle of readers are the collaborators: musicians, filmmakers or people who work with images, lighting designers, choreographers. It’s wonderful to see a group, with the author among them, gather around a text and drill for core samples. The holes they leave in the textual material let a kind of light through that lights up a unique path, the one taken by the artists gathered around the text. On either side of this, side roads open unexpectedly. It’s up to those in the second circle to take them or not.

The second circle is made up of the audience members.

Anyway, all of this is probably crassly obvious. Some things are obvious — even fundamental for my director friend— that take me years to learn. In order to learn them, however, I don’t take the road travelled by schools and “the profession”. Learning and going into a profession is a noble thing. The transmission of knowledge, of a way of thinking that could be a thousand years old… there is no doubt that those links are indispensable, I’m not saying otherwise.  I received training myself. I was trained and the shape I was trained into — let’s just say it’s the shape of a round peg — I’ve been trying to fit into a square hole for the past twenty years. I strayed from the destination laid out for me, I chose the space next to it.

Am I alone in literature? While reading and writing are solitary activities, we are never alone. Each text carries a multitude and I can’t read one without a sound, an image or another text coming to mind, which then make me think of which artist could crystalize or animate this apparition. But let’s be clear: what I do through Rhizome is neither new nor unique. This famous disciplinary no man’s land is increasingly populated by artists who call themselves either multi, inter, cross- or indisciplinary. Is this the end of artistic disciplines as we know them? I don’t think so. Even though practices are multiple and borders are shattering, I believe that artists think of their art as “starting from” something like an origin. As for me, I am still a literature person. It’s where I come from.